You are at:Home»Topics»Media & Tech»So You Want To Use Your Computer Live? Reposted with permission from Aaron Hein who blogs about technology and worship at inheinsite.blogspot.com.

With everything getting faster and cheaper these days it’s easy to think that if you just dust off that extra computer you have laying around the house then you have what you need to use it in a live application. Let me just say that if you have to dust it off it’s unlikely it will be able to perform the way you need it to and even if it can it is only one piece of the puzzle. So the question I want to answer in this segment is:

“What do I need to use my computer live in an audio application?”

The answer is much simpler than you might think but many people tend to overlook at least one of the 4 crucial components: the computer, software, audio interface, and MIDI controller. Let’s take a look at each one and explain why it’s necessary in creating a great audio computer rig.

This is obviously the heart of your setup since the entire topic surrounds using a computer live but what kind of computer do you really need? Do I have to have a Mac or will a PC do the job? Does it have to be the fastest computer on the market or will a computer that is a year or two old do the trick? Here are some general rules of thumb to help you know if what you have will hack it or guide you to making a good purchase if your looking for a new computer.

1. The debate between a Mac (Apple) and PC will live on for eternity. I actually enjoy using both platforms but for this type of application I have found Mac’s to be much easier to work with. Truthfully the biggest reason is that the software that I use is Mac only so that makes my choice pretty easy. There are lots of PC programs as well and if you have one you love a PC will do the job. We’ll leave this topic at that.

2. Generally, computers that are within the last two years most likely will work for this application. They should have enough processing speed, support enough ram, and be able to run the most current operation software platforms so that you can run the software you need to. Some general specs to look for would include a dual core processor, at east 4 GB’s of ram, and a 320GB hard drive or larger. I also recommend using an external hard drive to store your samples as this will take a lot of strain off of your internal hard drive and improve your overall performance. 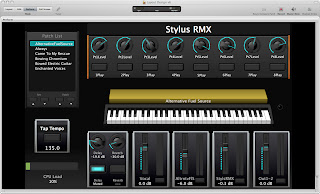 Software is extremely important because it’s really what dictates what you can do and how you do it. The computer is just a processor at this point so software can make or break your experience. Since we are talking about a live application I believe Apple’s Mainstage is the best at what it does. For the PC side there is a program called Ableton Live (which also runs on a Mac) which is uniquely good at what it does. It’s feel is very different from Mainstage however. Other than Ableton many people will use an audio sequencer like ProTools, Cubase, or Sonar to accomplish a similar task. Mainstage by far out shines the other applications for a live performance platform as that is it’s specific intent, but people have different workflow preferences and may feel a program like Ableton Live is better suited for the task. Remember it’s about you, the user and what you are trying to accomplish. 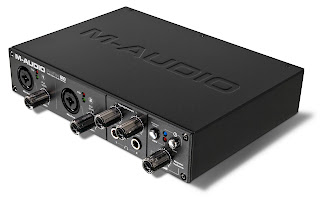 This is just a fancy term for external sound card but it is VITAL to making your computer capable of pulling off it’s job in a live application. So why do you need one when you already have a sound card built into your computer? There are many reasons why it is necessary:

1. Latency – All computers have what’s called latency which basically is the time it takes the computer to process the audio signal passing through it. Built in sound cards are very slow typically. Since you will be using this live you don’t want any weird delay because it will make it almost impossible to play a sound or run your vocals through effects. It would be like hitting a note on your keyboard and having it play a second later. Almost all audio interfaces have special drivers (called ASIO drivers) which are super fast and allow you to get the audio through the computer without noticeable delay.

2. Professional Connections – You might need a way to plug your microphone or guitar into your computer so you can use the effects inside it. Depending on the audio interface you choose you will have the ability to plug in multiple things as once as well as feed multiple outputs to different channels on the board or snake. For example I use an M-Audio Profire 610 which has 4 analog inputs and 8 analog outputs. That might sound like overkill at first but it doesn’t take long to starting using them. With my setup I use Output 1&2 for my stereo keyboard sounds and I use output 3 for my direct vocal send. There are many more scenarios to could be cover here but trust me when I tell you it’s better to have a few extra than not enough!

3. Sound Quality – There is no question that an external audio interface will sound 10 times better than your build in sound card. This stands to reason when you consider the internal sound card probably costs less than $5 to make and is not a core component to your computer, yet a decent audio interface starts at around $99. Hardcore Mac fans will tell you they use their internal sound card with great success but I’m telling you, you don’t know what your missing until you get professional sound card. The result is dramatic and it can make the difference between you cutting through the mix and being heard by the audience or get buried in the mix because you lack sonic definition.

The MIDI controller is a key component because it’s the piece of hardware you will be interacting with in a live performance and it brings to life everything else we have talked about. There are lots of options for MIDI controllers these days and most of them have more knobs and buttons then you’ll know what to do with until you start seeing the potential and assigning it to your software. I currently use the Edirol PCR-500 49 key controller pictured above and almost every single thing you see on the face of it has a label of some kind. Just to give you an idea of how powerful it is here are some things my controller does for me:

The possibilities are endless!

As you can see all 4 parts are vital to turning your computer into something that you can perform with. Now that you have a good understanding of what you need you can focus on buying products that fit your work flow and personality so that your rig is your own. Please feel free to post any questions you might have.