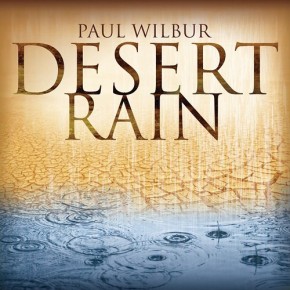 Re-posted with permission from Mat Reames.

Desert Rain by Paul Wilbur is a live worship music concert in Israel with 5,000 in attendance from around the world who gathered to sing over the nation of Israel and pray for healing rain that would bring new life to dry hearts and desert lands. The location for this concert was En Gedi, the same desert where David hid from King Saul in Biblical times. This was a tremendous night of praise and worship and many testimonials of supernatural activity by attendees.

It is not a secret that I love Paul Wilbur. I have been listening to his worship for many years and have most of his albums, save for his Greatest Hits, so when I heard that he was working on a new project I was seriously excited. This is a live recording of almost entirely new songs. I was lucky to get this CD the day it came out thanks to a friend of mine. Sadly, I have not seen much press on it. I have come to expect a lot from Integrity Media when it comes to promoting a new Album, and except from one mention in an email, Desert Rain has gotten no press, at least none I have seen.

Paul Wilbur is a Messianic worship leader. His songs include a mix of English and Hebrew.

This album has a wonderful flow. It begins with a very middle-eastern and Jewish intro that builds you into the first song. The first track Zealous over Zion is very high energy. The pace of the album is a pleasant slide downward. It begins fast and each song progresses to a slower tempo and rhythm. This is due in part to the fact that it was a Live night of worship that was recorded.

For me, there were 4 stand out tracks. Zealous over Zion, I Will Never Leave You (which is a sung with his daughter-in-law), Blessed is the Lord, and Behold the Lord. The first two are both High Energy.

Zealous over Zion has a traditional Wilbur feel to it with its distinctive rhythm and flow tailor made for the dance.

I Will Never Leave You is different in that it has more of a pop aspect to it. The rhythm is not something typical of Paul, but the song blends well into the rest of the album.

Blessed is the Lord is for my money the best track on the album, and on of the best tracks that Paul has ever recorded. Its slow tempo is something that is easy to follow and sing with. The song itself is primarily keys and guitar. This makes it very simple for a church to replicate. The chorus blends Hebrew and English perfectly in such a way to make the Hebrew easy to understand for those who do not speak it.

The album as a whole is something that any church should be able to produce musically in their own worship services and that is something I love. A lot of worship albums are super, passionate, musically incredible, and theologically great, but many lack the ability to be easily transitioned into the Local Church setting.

If you are going to buy a worship album this month, this is the one to get. I give Paul Wilbur a standing ovation. (I am in a Mcdonalds using their internet and everyone looked at me like a moron.) I highly recommend this album.

Included in this post is Paul Wilbur himself sharing the experience of Recording this album. The story of what it took to record this is amazing. Please watch, and then share.